Home News Some thoughts on creating a safe learning environment for your teammates to succeed by Elena Paraskevas-Thadani (She/Her)
202010.27 0

Back in March, when we realized we were going to be stuck at home, I told him he would have to learn his way around the kitchen. If there was a grease fire he could call me. I trusted him to handle the rest.

The last few months he independently researched and experimented. He had the freedom to make mistakes and messes and the responsibility of cleaning them up. He would taste his work thoughtfully, “too dry,” “too eggy,” “too sweet.”

There were times I caught myself — “you should just…” and stopped. It was his cake after all. His learning. And by the way, I don’t know how to make a cake from scratch. Had I interjected, my limitations would have become his own.

He baked today’s cake in the middle of an elearning school day during his lunch period. Unprompted, on his own. It was the freedom to experiment and make mistakes which led to his awesome creation. It was fun for him to try and discover new things. To learn. Without my involvement or interference.

Allowing your team to try and fail safely, so they can ultimately succeed, takes self restraint. You can be there for the grease fires but let them bake on their own. The ultimate rewards are delicious. 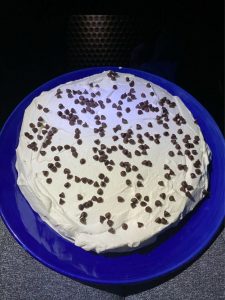